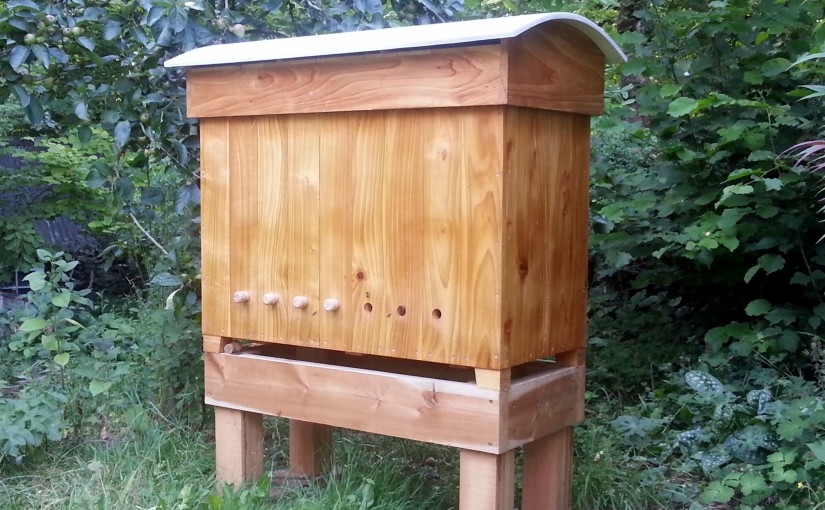 The Modified Golden Hive is a collaboration between John Haverson and Matt Somerville; it is a development of the German Einraumbeute hive. Using natural materials as much as possible, the modified golden hive adopts features from the hives of Warré and Lazutin as well as those seen in straw skeps and tree trunk cavities.
To address concerns expressed about condensation in the ERB, and to improve the retention of nest scent and warmth (Nestduftwärmebindung), we decided to adopt the Warré top-cloth and deep quilt arrangement as well as insulated walls similar to Lazutin’s hive but using a cedar-straw-cedar sandwich.
A sump with an inspection hatch is also incorporated; to keep nest debris away from combs; to enable non-intrusive inspection of combs and floor debris as well as the placement of a heat-retaining, moisture-absorbing floor covering in winter.

The long deep trough hive uses up to 22 Dadant sized frames approximately 460mm deep and 285mm wide. This tall, narrow configuration enables the winter colony to sit in 9 or 10 frames under its stores to prevent the isolation starvation sometimes seen in wider, shallow hives.

The horizontal configuration is attractive as the operation is reduced to moving frames horizontally rather than lifting boxes vertically. In the case of minimal intrusion husbandry, it also enables less disruptive, less comb-damaging access from one side of the nest for essential inspections.

This hive type has been a success with the bees really making use of the deep frames. I have noticed rapid growth during the Spring flow compared to the Warré hives. In these hives, the bars of the box below the colony can tempory slow progression in the limited flowing season.

However, from using this hive for the past few years, I have noticed that we simply don’t have the same environment as Lazutin’s wild Russia and the flow of nectar is not nearly as great. This has been noted in the press with a marked decline in yields over the last few decades, despite many beekeepers feeding sugar in Autumn and Spring.

This year I designed a smaller hive using 13 frames of the same frame dimensions but having a few new changes.

This is the Golden hive which can be seen in more detail on the Golden Hive page. 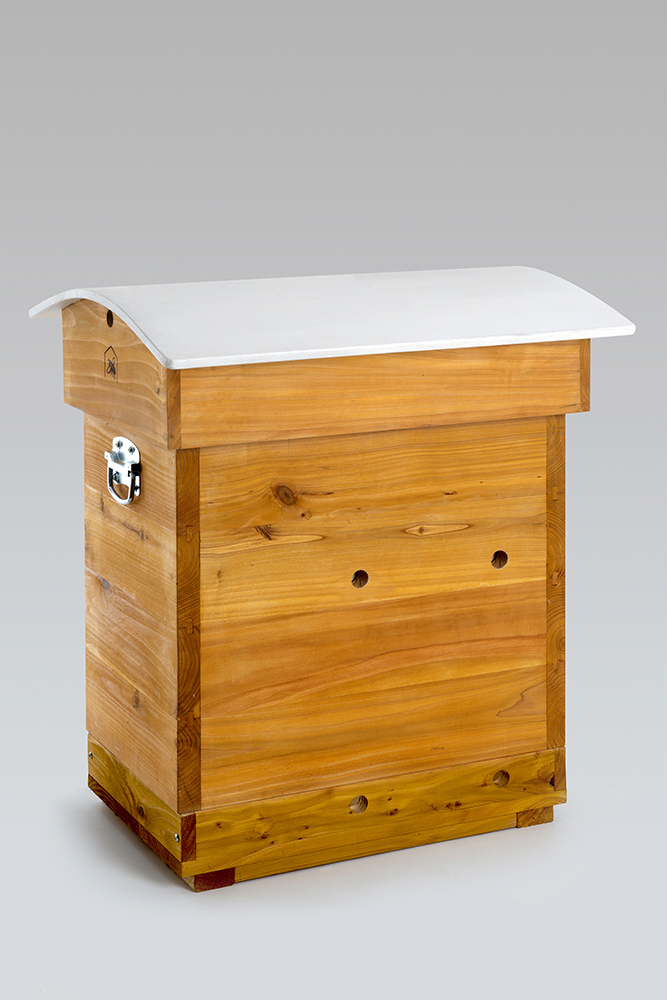 I have noticed in the Freedom hives that the bees like a top entrance, especially when bringing back nectar and pollen. The bottom holes are used for fanning which can go on through the night after a busy day foraging. Because of these observations, I have added two top holes, usually, the top left is stoppered with a cork and uncorked when the bees are very active.

The condition of the bottom board can be checked by removing the lower end board, held in by two screws in the bottom right of the picture.

This allows you to monitor and remove any dead bees, and see the growth of the colony using a mirror or camera.  If necessary, a tray for catching and counting Varroa mites can be added.

It is also useful for allowing a bigger access slot when “running”  in a swarm, or adding a bottom feeder, should a weak colony need a bit of help.