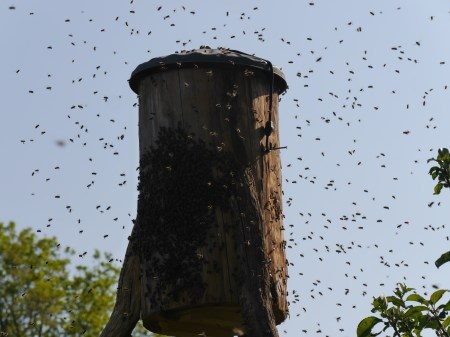 Wonderful news! We have bees!
I have been visiting my family in Cornwall this week, I love it here, especially in the spring! All the flowers are blooming and the apple trees are filled with blossom. It’s been beautiful sun all week, which makes it even more lovely and means we can eat outside.
It was here that the log hive making course took place last month. Since then, hives have gone up around the country and an older one that we have has been erected here. It towers on its three legs above the wildflowers, with a dustbin lid hat to protect it. We’ve had this hive for about a year now but it has not been set up and it has thus remained empty.
For the last couple of days, we have been seeing scout bees checking it out, so we have been keeping our eyes peeled for a swarm. It’s prime swarm time of year and the weather has been perfect: Warm and still and golden.
And then today I heard the buzzing. It was low but loud, hard to place and yet clear in the light breeze of the sunlit day. I went out of the back door and the air was thick with bees as they swooped and circled in their mad dance.
It was pretty clear that they had come from our existing hive but, as they flew off, the bees left in the hive resumed their normal day of gathering nectar from the flowers, seemingly unperturbed by the swarm that had just left them.
We followed the swam through the garden, away from our waiting, empty hive, and watched with disappointment as they gathered in an awkward place. A hazel branch, deep inside the hedge. Bees are not aggressive when they are swarming so I was able to stand close enough to see as they clustered together to protect their queen.
It would have been easy for one of us to put on a bee suit, pick the cluster of bees up, and move it to the new hive, but we didn’t really want to interfere. So, we called our favourite bee expert… Matt Somerville! He said that often bees will swarm and then settle a little way from their starting point and then, probably an hour or so later, they will take off and head over to a new home.
So, we all dissipated through the garden to wait. I went to do some revision for upcoming exams and it was while I was writing about the odyssey that I chanced to glace across the garden and the bees were in the air again! I sounded the excited alarm and we gathered to watch them fly to their chosen sight.
Matt had said that if there is more than one viable home for them they will send scouts to each who will explore and then come back with information. The bees will then make a democratic decision and go to the best hive.
We were still all scattered through the garden, but as each of us watched it was clear where the bees were heading for. Our waiting log hive.
The air was thick with wings and the bees flashed golden in the afternoon sunlight. The incessant hum drowned the sound of the river until all that could be heard under it was our cries of excitement and bird song.

We gathered on the slope as the bees reached the new hive. We were standing in the swarm as the bees flew all around us. One decided to rest on my hand and though it startled me a little it was so sweet. The whole experience was magical, we watched a colony of tiny creature choose a place that we had created with love, for their new home. We had made a habitat that the bees actually wanted to live in. 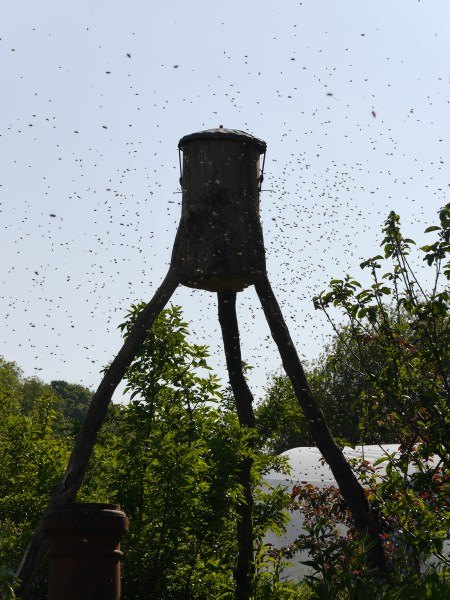 The bees clustered on the log, crawling inside, danced in the air waiting to get in, and alighted on the grass all around us.
I was filled with excitement and delight, the joy of spring and a sweet happiness of watching something natural and ancient and primal and so perfectly coordinated. It felt like a blessing for us all on a stunning spring day. None of us stopped smiling for the rest of the day. 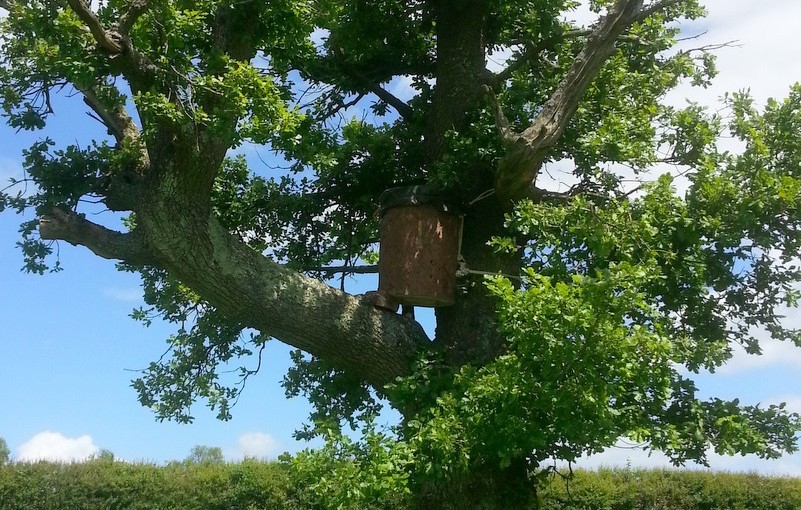 Below is a gallery of some of the hives that are being set up across the United Kingdom, for the bees to self-populate and thrive without our intervention.